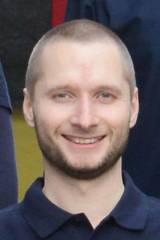 Christian Hovy is research assistant at the Department of Informatics at the Universität Hamburg. There, he also studied Informatics with focus on Software Engineering and with Oceanography as minor subject. In early 2011 he received his Diploma degree. Besides his studies, Christian worked as a free software developer. Afterwards he worked for Workplace Solutions GmbH and was involved in several software development and consultancy projects.

For his diploma thesis, Christian developed the open source tool AccessAnalysis, an Eclipse plug-in for measuring the usage of access modifiers in Java projects.

His current research interests are software engineering practices in HPC. In the context of his doctoral thesis he works on testing methods for climate modeling. For his research, he collaborates with scientists from the Max Planck Institute for Meteorology and from the German Weather Service (DWD).

In 2014, Christian married and changed his last name from Zoller to Hovy. He is member of the Scientific Computing group since 2016, before that he was part of the Software Architecture/Software Engineering group.